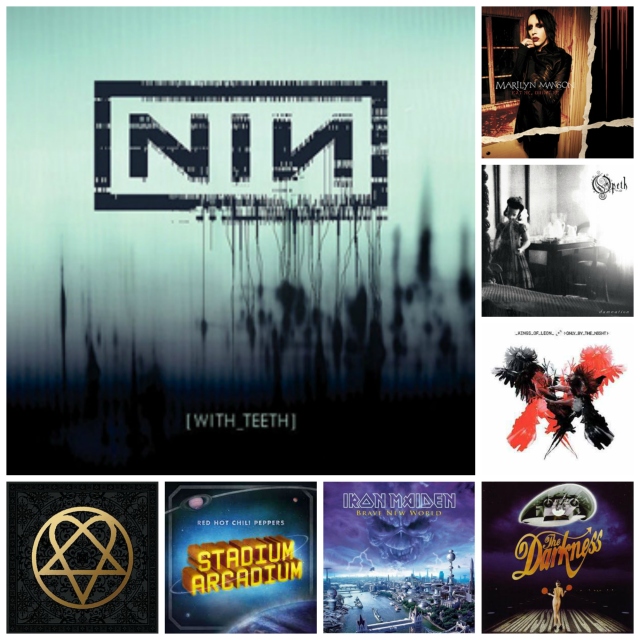 Mission impossible to decide just one album this time either, so I listed my nine favourite albums of the 00s in no particular order.

HIM – Love Metal (2003). Been a fan since their first album, though the later albums never rocked my world in the same way. However, on Love Metal there are a couple of gems like Sweet Pandemonium, This Fortress of Tears and Endless Dark. Picture.

Opeth – Damnation (2003). Serene, haunting and beautiful. Not like a typical Opeth album, but with the clean vocals and clean guitars, listening to it is a capturing experience. The album’s covert art is beautiful, too. Picture.

The Darkness – Permission to Land (2003). I remember listening to this album like crazy, it has a great rock’n’roll groove. Reminds me of summer. It’s an album full of great songs such as Get Your Hands Off My Woman, Growing on Me, Love Is Only a Feeling and Love on the Rocks With No Ice. These tunes make me smile whenever I feel grumpy. Picture.

Nine Inch Nails – With Teeth (2005). Trent Reznor is just brilliant when it comes to electronic music. Cannot get enough of this album. Just listen for example to the songs like All the Love in the World, The Hand That Feeds, Everyday Is Exactly the Same, With Teeth and Right Where It Belongs. Picture.

Iron Maiden – Brave New World (2000). I’ve always preferred Iron Maiden’s albums from the 80s, but Brave New World convinced me with the songs like The Wicker Man, Blood Brothers, The Mercenary and Out of the Silent Planet. Picture.

Marilyn Mason – Eat Me, Drink Me (2007). Dark and depressing, just the way I like my Manson, especially songs If I Was Your Vampire, Heart-Shaped Glasses (When the Heart Guides the Hand) and Evidence. Actually, I wasn’t sure which MM album I would choose here, since I liked also Holy Wood (In the Shadow of the Valley of Death), released in 2000. Picture.

Kings of Leon – Only by Night (2008). Love the singers voice, just listen to the tracks Closer, Use Somebody, I Want You, Be Somebody and of course the hit Sex on Fire. Also an album that should be listened to in hot summer nights. Picture.

Depeche Mode – Playing the Angel (2005). Depeche Mode comes and goes on my playlist, but Playing the Angel stayed for a little longer, and keeps coming back every now and then. My favourite tracks on the album are John the Revelator, Suffer Well, Precious and Lillian. Always makes me wanna dance. Picture.

Rolling Stone has an impressive list of the Best Albums of the 00s, too.

And, cannot leave you without a book tip – Get to know the shock rocker Marilyn Manson’s story in a book called The Long Hard Road Out of Hell (1998), autobiography by Marilyn Manson with help of Neil Strauss. It contains plenty of photos, Manson tells about his life starting from his weird childhood when he was known as Brian Hugh Warner.

“In his twenty-nine years, rock idol Manson has experienced more than most people have (or would want to) in a lifetime. Now, in his shocking and candid memoir, he takes readers from backstage to gaol cells, from recording studios to emergency rooms, from the pit of despair to the top of the charts, and recounts his metamorphosis from a frightened Christian schoolboy into the most feared and revered music superstar in the country. Illustrated with dozens of exclusive photographs and featuring a behind-the-scenes account of his headline-grabbing Dead to the World tour.”